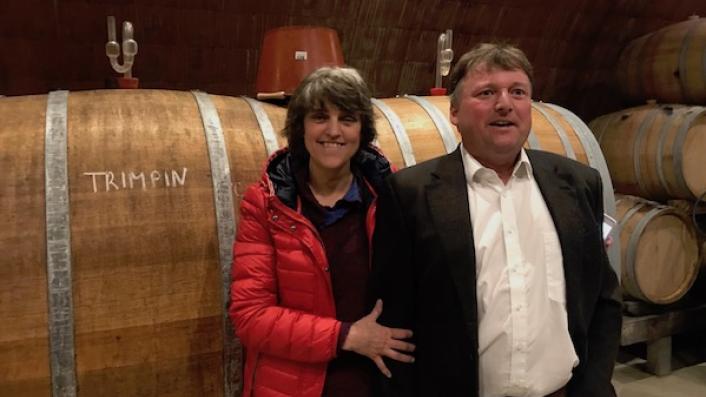 ‍A photo report on one of Baden's more unusual producers of wine and much else.

Two of last week's articles, The beards of Baden and Wine's Salon des Refusés, were inspired, at least in part, by a recent visit to the rambling empire of Edel and Hanspeter Ziereisen (pictured in their new underground cellar) in the little village of Efringen-Kirchen in the far south-west corner of Germany, just over the border from Switzerland and Alsace. The Rangen vineyard in southern Alsace is very close.

Their operation is so unusual that I thought I would share a few pictures of it, not because they are wonderful pictures (as is only too clear) but because of what they show. The Ziereisens have been based in the village since 1734 but it was Hanspeter who decided in 1991 to concentrate on making fine wine, as well as growing other crops, selling them through a farm shop in their busy timber-framed courtyard, running a bed and breakfast, and continuing his work with wood and metal. Below is one day's trimmings from this year's white asparagus crop.

One of their many recent projects has been the construction of a vast bunker in a field outside the village that serves as their underground cellar for the wines they age at considerable length in largely old oak. Some of their 2017s are still fermenting. Given his interest in wood and metalwork, it was perhaps not so surprising that Hanspeter commissioned sound artist Trimpin, currently based in Seattle, to line the roof of the cellar with a long row of hanging staves (bits of old barrel that I hope you can make out at the top of the picture below). They can be electronically programmed to play various tunes rather like a xylophone.  As I stepped in to the cellar, I was suddenly greeted with a digital version of 'God Save the Queen'.

In the centre of the village Hanspeter runs a large mechanical workshop and yard for all the equipment he has made, both for wine production and other uses. He treasures this white wine press from the 1950s and, to judge from his workshops, sheds and yard, does not thrown anything out.

He's a bit of a collector, not just of old cars, but of beloved ancient tractors made to his own design.

And even when he's at his desk in the office at home, he likes to be able to do a bit of handiwork.

After the Badische Landweinmarkt described in The beards of Baden was a dinner with the crowd of helpers and ex-interns that the Ziereisens seem to collect around them. They were all given special T-shirts this year.

But the setting of all this activity is particularly beautiful...

From the Ziereisen vineyards above the village on a hill Hanspeter claims is the only entirely south-facing hill in Baden, you can see the Swiss city of Basel and, on the skyline, the snow-covered alps. As well as having built up their holding from 0.5 ha in 1991 to 20 ha (50 acres) of vines in Baden, they own 6 ha of vines and another winery over the border in Switzerland.

Vine density is high and some of the vineyards on these slopes of Jurassic limestone are particularly steep. He's experimenting with some Syrah planted at 14,000 plants a hectare. Gutedel (aka Chasselas) is a local speciality and can produce wines of real interest here, not least when planted at 10,000 plants a hectare as HPZ does. Hanspeter admits that when he married he wanted to make only Pinot Noir (Spätburgunder), but Edel insisted he kept the faith with the local specialities Gutedel and Pinot Gris (Grauburgunder).

Keep up to date with Ampelia

Receive news, announcements and exclusive details on events and offers.