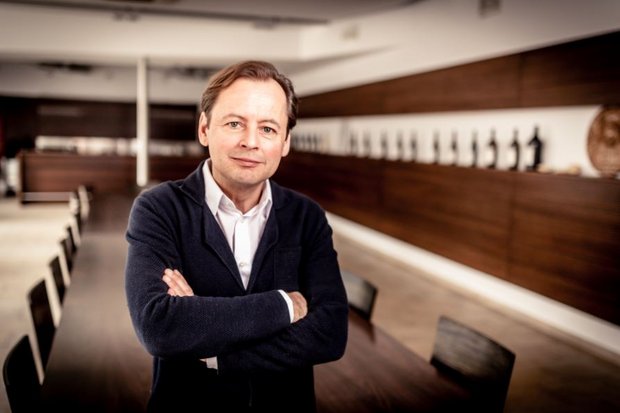 One estate inevitably becomes the toast of Austria when falstaff magazine announces its “Winegrower of the Year.” This time an entire city and 28 monks are joining in the celebrations. The Winegrower of the Year 2020 is Fritz Miesbauer, managing director at Weingut Stadt Krems and guiding light for the wines at the Stift Göttweig as well.

It cannot be overstated how much of a jaw-dropping sensation it is for a working cloister and an entire city to claim one of the highest honors in the wine world — together, no less. The award can be attributed directly to the labors of Managing Director Fritz Miesbauer, a dynamic winemaker who together with his young, motivated team has driven Weingut Stadt Krems to the peak of Austria’s winemaking elite, and elevated Weingut Stift Göttweig to star status at the same time.

Just over 40 hectares are currently owned by the city of Krems. Those holdings include numerous parcels in exceptional sites, all cultivated by an estate that was once housed in a historic cellar directly in the old city center but has been located alone the city moat for almost a century. Its vineyards are among the oldest in the region, having once belonged to the Bürgerspital (13th century) before being gifted to the city in 1452. Winegrowing plays a massive role in the self-identity of the city of Krems. In medieval times, more than 50 cloisters and monasteries held vineyards all around the city. The “Weinzierler,” as Krems’ winegrowers were known, cultivated their plots and sent the fruit
to majestic wineries for processing and barrel maturation, with the anished wines then shipped up the Danube to Upper Austria, Salzburg and Bavaria for use as sacramental wine at cloisters.

Yet the estate had lost much of its luster by the time Fritz Miesbauer assumed the helm in 2003. Miesbauer had previously served as cellar director at what is now Domäne Wachau, with an outstanding record of accomplishment there. At the tender age of 27 he was declared Winemaker of the Year by leading Swedish wine magazine Gourmet. The switch to Krems and its municipal wine estate certainly raised some eyebrows.

“I was always convinced that the estate’s vineyards held tremendous potential,” Miesbauer says with delight. Numerous things had to happen before that brilliance could be reflected in the bottle, however:

• Many of the vine stands required rehabilitation.

• 29 hectares of vines had to be completely replanted.

• The historical stone walls were restored on 5.4 hectares of vineyards.

• More than ave million euros were invested in all.

BUT: the estate, which until 2003 required subsidies from the city of Krems to operate, emerged as a self-sustaining business!

“When I came to the company in 2003, the mayor at the time, Franz Hölzl, laid out four goals that I should achieve: high quality, good image, economic independence and the trust of the city administration. We’re three mayors past that point, and at this point we’ve reached each of those goals, all while working in friendly partnership.” The declaration as “Winegrower of the Year” only confirms this.

The investments and changes bore fruits. Each year saw Weingut Stadt Krems climb another few rungs up the rankings and ratings. Where the early vintages earned between 85 and 90 points, those numbers slowly but surely began to rise. “To succeed in the wine industry, you need a tremendous amount of patience, because change takes at least a decade to really manifest itself, and sometimes a full generation,” Miesbauer says. No problem for a city with a millennium of wine history behind it, but more of an issue for a city administration facing annual budgets.

“The fact that we are representing an entire city with our wines has advantages and disadvantages,“ Miesbauer explains. “You ultimately bear responsibility for 25,000 co-owners. But when something does work well, you get a lot of very positive feedback. You build trust, respect and many friendships along the way.”

By turning the opportunities he observed into reality, Miesbauer successfully transformed wines from the city of Krems into radiant wine personalities. The bottles stand out for their precise aromatics, liveliness and elegance. Miesbauer has always had fine talent for finesse, producing lithe wines of polish even in warm vintages. The single site wines from the Wachtberg (Veltliner) and Grillenparz (Riesling) have been classiaed as Erste Lagen by the Österreichische Traditionsweingüter, placing them among the elite of Austrian winegrowing. In recent years, these wines have lifted Weingut Stadt Krems repeatedly into the Top 100 of Wine Spectator and helped it claim the Kremstal Cup from falstaff magazine several times.

The changes have drawn the attention of more than just trade magazines and critics. The wine estate itself has seen massive changes to its customer base in recent years as well. Today 75% of the wines are exported, to 26 different countries.

Stift Göttweig, a Benedictine abbey, stands proudly across from Krems on the south bank of the Danube. Monks have been cultivating wine here on the abbey’s 26 hectares of vineyards for almost 900 years. The winegrowing estate was outsourced beginning in the 1980s, and in 2006 a consortium of wine enthusiasts assumed responsibility for cultivation. At the same time, the reins to the wine production itself were handed over to Fritz Miesbauer. Here too the talent and loving devotion of the dynamic winemaker soon made themselves clear. Bottles from Stift Göttweig were first upgraded on the outside through an unforgettable label motif: the world-famous ceiling frescos from Paul Troger from 1739. The wines inside also began a steep ascent, emerging as classically lithe, elegant and terroir-driven representatives of the Donau region. The single site wines from Ried Gottschelle, Silberbichl and Pfaffenberg in particular are counted among the finest ambassadors of the Krems Valley.

Keep up to date with Ampelia

Receive news, announcements and exclusive details on events and offers.